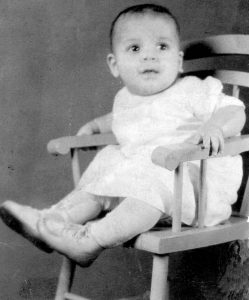 I’m what was called a “Depression baby,” born on August 5, 1932 in the midst of the Great Depression. America. The world, was in a free-fall. Stock market had crashed. Massive unemployment, no “safety net”, soup kitchens, riots. My parents, Clarence and Louise (Dixon) Johnson were Jamaican immigrants, important roots for my life, as it turned out.

I was the “baby” of our family, preceded by my older brother, Calvin, and sister, Eleanor. We lived in a single family, four-story, brownstone, semi-attached building, built in 1871, at 14 Linwood Square, in the Highland Park section of the Roxbury neighborhood of Boston, Massachusetts.

Looking back, where I lived has always had an outsized influence upon my life’s trajectory. The theme of education for all – not just for the chosen few – has been an almost inescapable constant. Be it the value system of my Jamaican immigrant parents, my public school education in the Highland Park and Hill sections of Roxbury, and higher education in Washington, DC, and New York.

At 14 Linwood Square, we were 12 people in six bedrooms. Sharing our home – and contributing to its upkeep – were my Aunt Edith, nicknamed “DeDe” Dixon; her daughter and my cousin, Winifred, or “Winnie,” (Dixon) Howes; Winnie’s husband Willie; and their child, Rodney. Rodney and I were, and still are, like brothers. They were followed by three tenants, Mr. Rubin Simpson, Mr. Clifford Jordan, and his partner, Ms.Mattie Davis. It was a common and necessary practice to take in relatives and boarders to help make expenses.

We were an extended family, that village that is required to raise a child.

Ma and Dad were part of the Great Afro-Caribbean Migration of the early 20th century. As British colonials, they weren’t subject to America’s racist exclusionary immigration policies, barring the immigration of Africans into this country – unless you were enslaved, of course.

For several generations their families had lived in Trelawny Parish in the northwest area of Jamaica, then a colony of the British Empire. Dad’s father, Prince, earned his living as a carpenter. Ma’s father, Neithland, earned his living as a planter. In Jamaica, like the rest of the British Empire, class, not race, defined one’s status in the community, and that definition meant there was little opportunity for social mobility.

In later years, Ma and Dad each told me that America represented economic opportunity and hope for social mobility. Mom, financed by family members, emigrated to Boston in 1917, via Ellis Island on the S.S.Almirante, Like my Aunt Dede, and Ma’s cousin, Hilda (Dixon) Jackson, she worked as a live-in maid for a well-to-do European family in the upscale village of Brookline, just outside Boston’s city limits.

Dad with no family support, emigrated from his home in the Jamaican seaport town of Falmouth, by way of Cuba where he harvested sugar cane for two seasons, to Key West, FL, arriving in Boston in 1921. I don’t know why Dad decided to come to Boston, but looking back, he might have been influenced by the presence in Boston of a childhood friend, Eric Jackson.

Dad never said so, but I later learned that harvesting sugar cane was an awful – and dangerous job. Dad’s circuitous journey from Falmouth to Boston typified his grit. Although he never used it as an example, it exemplifies his talk to me as a child. “Remember you’ve got to be twice as good…”

Within a month after I turned four, Mom enrolled me in the kindergarten of the Nathan Hale Primary School on nearby Cedar Street. During the Great Depression, early school enrollment for children was encouraged to create more teaching positions, perhaps because high unemployment and a low birth rate resulted in low student enrollment.

Classes were segregated by sex at the Hale School, as they were at almost every grade of my public school education. We recited the Pledge of Allegiance – without the phrase “under God” and with our right hand held in front, exactly like Germany’s “Heil Hitler” – preceded by our teacher piously reading Scripture from the Old Testament.

I didn’t like prayer in school then and I don’t like it now. I attended church regularly. What right did the Boston School Committee have to subject me to still more seemingly ritualistic prayer five more days a week. I tuned out those ritualistic prayers and have always been a vocal opponent of prayer in our public schools.

My parents’ well-intentioned but misguided decision to enroll me in school at such a young age consistently placed me among students one or two years older than I for the duration of my public school career. It had lasting consequences for me. I’m sure I became a prime target for bullying in later years because I was younger, less mature, unsure of myself – and husky for my age. I learned about justice, or the lack of justice, from a Black kid, not a white kid, in the schoolyard.

I remember little about my kindergarten teacher, Miss Tischler, except that she seemed to be a warm and caring woman. What I know now was that she was another example of institutionalized sexism and the failure of justice for all.

Miss Tischler, like all other women teachers in the Boston school system at the time, could teach only so long as she remained single. The Boston School Committee adopted this blatantly discriminatory policy in a misguided effort to preserve scarce teaching positions for men, who were presumably the family breadwinners during the difficult times of the Depression.

I really liked the Hale School and my world now extended beyond Linwood Square. I made new friends and the school had a playground that seemed huge to me. During my favorite subject – recess, of course – I could play tag, dodge-ball and generally rough-house with my new-found friends and classmates.

The Hale student body pretty much reflected our neighborhood and Boston’s population; Blacks were only 2.7% of Boston’s population in the 1930’s. It was overwhelmingly white, with just a few Black kids, but race wasn’t an issue to any of us kids at the time. Our working-class neighborhood was a European ethnic polyglot of families: Irish, Greek, Polish, German, Italian. I never met an Asian or Jewish child until I was in was in the sixth grade in another neighborhood.

One of my kindergarten classmates was another Black kid, Donald Shelton, who lived at 9 Linwood Square, directly across the street from us. It was a big day when Don and I were allowed to walk the six or seven blocks to school unaccompanied.

Don and I soon became inseparable and it was the beginning of a lifelong friendship that continued until his sudden death at the relatively young age of 50.

If you saw one of us, chances were that you saw three of us — Don, me, and his younger brother, Howard “Juke” Shelton. The three of us often spent overnight visits with one another and we soon became members of one another’s family. Our parents became one another’s parents. 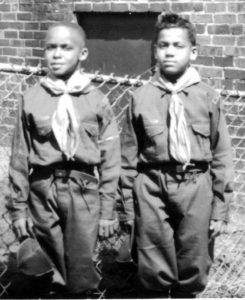 At the Norfolk House Community Center on Eliot Square, not far from Linwood Sqr., Don and I (to the disappointment of Juke, who was too young), joined Pack 17 of the Cub Scouts. We memorized the Cub Scout Oath, studied Morse Code, tied rope knots, and learned how to make a “telephone” out of two cans and a wire. We looked real dandy in our freshly pressed Cub Scout uniforms, I cherish a faded photo of me saluting.

The three of us frequented the Roxbury Boys Club on Dudley Street where we learned to swim “balacky” – naked – played ping-pong, pool and attended Saturday night movies. Our world got larger as we broadened our activities and sphere of friends.

Don’s athleticism began to shine during those early days at the Boy’s Club. He could run faster, swim better, throw harder, and catch better than any of us. He was always chosen first in pick-up games. I secretly envied him, because I was a slow runner, awkward, had bricks for hands and was usually last to be chosen in pick-up games. In those days, much like today, a kid’s athleticism was the measure of his status among his peers. 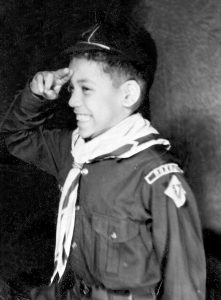 But for the racial barriers at top-notch colleges and the training they offered, I have no doubt that Don had the potential to be a candidate for future Olympics. Later, at age 50, in a tragic twist of fate, Don died of a heart attack while jogging in Franklin Park, a place where he, Juke and I spent so much fun time during our childhood. In a final touch of irony, Don collapsed – while jogging – just across the street from the senior citizens’ apartment building at Elm Hill Avenue and Seaver Street, where my Dad lived at the time. His lifeless body was found by a longtime family friend.

Another kindergarten classmate, Charlie Georgenes, became a good friend. Like me, Charlie, of Greek descent, was somewhat shy. Maybe that’s why we clicked. Charlie lived just behind us, beyond a weed-filled field on Centre Street. His family owned a popular railroad-car diner at nearby Roxbury Crossing. In later years, the diner was moved downtown near Boston’s Newspaper Row, and renamed for his mother, Victoria. Charlie owned and operated Victoria’s Diner which became a Boston landmark, until it was sold in 2011.

Of the four of us, Charlie has since passed, but Juke is very much alive and well. He lives in New Jersey and, unlike many seniors, he is active on social media. We’re still in touch – by phone.