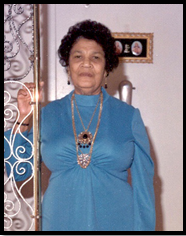 To say that Ma and Dad didn’t get along is an understatement. Yes, they both loved us unreservedly, but their frequent verbal altercations, though never becoming physical, scarred us all.

They seemed to argue almost incessantly, at all hours. More than once, in the wee hours of the morning, I was awakened by their loud, bitter arguments. I have no idea what their arguments were about. I know that Dad liked to play the numbers and gambled on horse and dog races. Much later, in my sister’s declining years and when Eleanor and I were the only remaining living family members, she confided details to me that showed Ma wasn’t without her personal failings either. I will keep Eleanor’s confidence here. “Let he who is without fault…”

By the time I was 12 years old, I feared bringing friends to my home, less they witness my family turmoil. I loved Ma and Dad very much, but I was embarrassed — and angered — by their vehement and public arguments. Once, returning home, I heard them arguing from the street. It was that public. If they truly loved me, I thought, why couldn’t they hold their feelings in check – for my sake. Most of my friends came from what I believed were happy two-parent households. Inwardly, I felt different from my circle of friends.

I was quietly pleased and relieved when, at long last, in 1946, Ma and Dad separated and eventually divorced. I was 14 years old. At long last, there was peace in the household, and I could openly cherish each of them and bask in their unconditional love.

I lived with Ma. Dad went to live with his grand-aunt Virgie (who I had never met) in her tiny two-bedroom apartment near Shawmut Avenue about three miles away. I visited Dad almost every week, and he walked the talk. He consistently met his child support obligations and always gave me a modest personal allowance – a dollar — when I saw him. 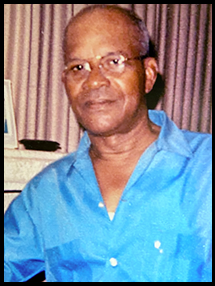 Dad was a self-made man, a classic “stiff-upper-lip” kind of fellow, the self-contained British colonial. He had supported himself since his teens, valued the imperative of hard work, and always strove for excellence for himself and others. He had no use for “slackers.” He believed that a real man met his obligations and took care of his family – hence that furnished room in Aunt Virgie’s apartment.

A good example of Dad’s belief’s in action was his relationship with one of my older childhood acquaintances, Guido St. Laurent. In adulthood, Guido became a well-known criminal, the leader of a violent criminal enterprise in our Roxbury/Dorchester neighborhood. Guido was reportedly responsible for more than one murder.

During Guido’s teen years, Dad would hire Guido for periodic day work. Guido was polite, on time, hard-working, and dutiful. In later years, when Guido was reviled by the media and many in the community, Dad would brook no criticism of “that boy,” Guido St. Laurent. Like my Dad, and even during his life of crime, Guido had a strong work ethic.

My takeaway from the Dad/Guido relationship? Character trumps everything. Like Dad, I measure a person by his or her character, not by one’s public persona, wealth, or academic achievements.

Dad was a proud man and would not tolerate slights, whether actual or perceived, from anyone, no matter what their race or ethnicity. Unlike me, he was fastidious about his belongings and surroundings. I vividly recall how he always kept his one pair of “dress” shoes neatly aligned in his closet, always shined, and stuffed with newspaper, in lieu of costly shoe trees.

He saved money by regularly cutting my hair with a set of old manual clippers from his days in Cuba. And he cut my hair according to his preferences – very short — not mine. That was a real bummer.

After my parents separated, and after consultation with my in-house barbershop experts – Don and Juke Shelton — I soon became a regular at a barber shop on Warren Street, the one that my tonsorial experts patronized.

For forty-five cents, a kind gentlemen greeted me like everyone else, carefully placed a freshly-laundered white cloth across me, and quietly asked me how I wanted my hair cut. Until that moment, no one had ever asked me that simple question. I didn’t know what to say, but I knew that I wanted to be like everyone else. I hesitantly pointed toward another kid nearby. I patronized that barber until I left Boston in 1949. Loyalty is another important value for me.

Though it was unspoken by him, I have no doubt that I was Dad’s favorite child. Why? Calvin was rambunctious, rebellious, and generally marched to his own drummer. (More on that later.) Eleanor? Well, she was a girl, subject to frequent illnesses. As such, in Dad’s mind, her future would likely be as a dutiful wife, mother, and homemaker. 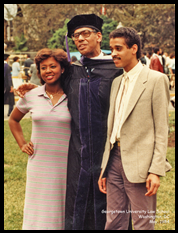 On the other hand, I was quiet and compliant, a prolific reader, and perceived as a bright child. Both of my parents seemed to make a fuss over me, without pampering.

In retrospect, I wonder whether Dad saw me as an extension of himself – a child who could and would achieve, able to take advantage of the opportunities which were beyond his reach and the reach of countless other Black people in Boston and elsewhere in the 1930s and 1940s.

What my father got, years after his passing, was a son who graduated from law school with Dad’s grandchildren, Alison and Scott, by his side.