12. Meanwhile, Back at Home

At home, in the fall of 1948, a confluence of of events, in no particular order, contributed to an increasingly dysfunctional family situation and the disintegration of my world.

First, Ma, despite the steady rental income from the two tenants in our triple-decker apartment building on Walnut Park, might have been struggling to maintain our home on her low salary as an attendant at Boston State Hospital. But, for reasons that totally escape me, she sold the income-producing building to Calvin, pocketed the proceeds, and moved Eleanor and me with her into Aunt Edith’s crowded one-bedroom apartment on nearby Gannett Street. (Calvin eventually lost the building to bank foreclosure.) 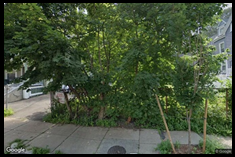 Living conditions there (it’s now a vacant lot) were lousy. It wasn’t a good situation for anyone, much less a 16-year-old kid like me. Ma and Eleanor shared a double bed and, when Aunt Edith came home twice weekly from her live-in domestic position, Eleanor slept on a couch in the same bedroom.

I was the only male in the household. I wanted and needed privacy – a commodity that was in short supply in this new place (certainly not a home). Instead I was relegated to a foldaway cot in the kitchen. But for the fact that Dad was living in a furnished room, I would have asked to live with him.

Then, at the beginning of my junior year at English HS (EHS), Calvin separated from his wife, Lena Range, an older sister of my good friend, Bobby Range. I was fond of Lena, but Calvin portrayed her as mean-spirited and irresponsible. And Ma, blind to Calvin’s shortcomings, “drank the Kool-Aid.”

Even later, when Calvin’s abuse was well-documented in court proceedings, Ma’s misguided loyalty and enabling attitude toward Calvin continued unabated. I felt marginalized by her attention to my troubled older brother and began to feel like a superfluous person.

It showed in school.

When I returned to EHS in the fall for my senior year, my classes were heavily weighted toward the sciences, particularly physics and chemistry – never my strength.  I also struggled in my second year of Latin. There was no academic counseling for students in those days, Black or white. Not surprisingly, my grades dropped precipitously.

My good buddy and fellow Spartan, Jimmy Galloway, was having similar academic problems and we reacted similarly. EHS had a “sick pass” system that kicked in once the school nurse left the building at about 9:30 a.m. After that time, a student could complain of a physical ailment – real or imagined — and, with no questions asked, be excused from school with a sick pass to be returned the following day bearing a parent’s signature.

Jimmy and I took full advantage of these sick passes and regularly forged our dads’ signatures.  Our homeroom teachers never questioned our excessive use of sick passes.

It wasn’t too long before our sick-pass scam escalated into occasional, then chronic, truancy. By the time, Jimmy Galloway and I managed to graduate from EHS in June 1949, we had skipped more than one-half of our school days.

Other than one teacher who once sarcastically noted the “honor” of my presence in his class that day, the implicit message became explicit to me in later years: Your well-being is of no concern to us.

No one ever reached out to our respective families to inquire about our chronic absenteeism. Was it racially–based? Did they welcome our absenteeism? Did it mean two less Black kids in the school? Their motivation didn’t matter, because it didn’t change the message.

Despite this bleak outlook, I did manage to scrounge up  enough credits to, not only graduate from EHS, but also to be considered for college, if not admitted.

College was my only goal, yet I was totally unprepared to reach that goal. I had no essential studying or time-management skills. I can say now that no EHS teacher had had a positive impact on me. 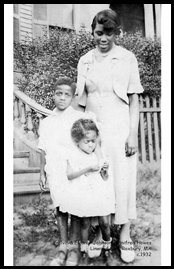 My loyalty to my family was severely tested when in January 1949, Calvin’s hitherto secret, abusive relationship with his now estranged wife, Lena, reached a crescendo. After months of stalking her, including cutting her home telephone wires, breaking into her home, and assaulting her, Calvin accosted Lena in broad daylight at her workplace in a government office building. He stabbed her. Lena survived the assault. Calvin’s prior abuse had never been reported to the authorities, and I didn’t know about it. I was shocked and appalled by Calvin’s  outrageous behavior.

The incident received front page newspaper coverage, which meant, I believed, that everyone in our neighborhood knew about it. Through it all, Lena’s younger brother, Bobby Range and I, fellow Spartans, remained th close friends. We laughed, teased, and played ball together, but we never discussed Calvin or Lena.

In later years,  whenever I inquired about Lena’s welfare,, Bobby would simply say, “She’s fine.” Nothing else. His hurt was deep. I understood. So was mine.

Calvin took a plea to misdemeanor assault on Lena and was sentenced to nine months imprisonment. He never accepted responsibility or expressed remorse for this or any of his subsequent violent acts, mostly against women. In later years, it would become apparent to me that Calvin met the criteria for what mental health clinicians’ term “asocial personality disorder.”

Ma, ever loyal to her first-born child, never expressed concern for Lena’s welfare and retained private counsel, who specialized in real estate, for Calvin’s defense.  Later that summer, just before I left for college, Ma was complaining  about not having enough money to pay my tuition. I was outraged to learn that she’d used my college fund to pay for Calvin’s defense. Once again, I felt marginalized by Ma in favor of Calvin.

Ma was so embarrassed by Calvin’s transgression and the neighborhood’s perceived knowledge of it, that within a month of his arrest, she upped and moved to Brooklyn, New York. She took Eleanor, who had graduated from Jamaica Plain HS a year earlier, with her. I was left behind to finish my school year.

I spent my final semester at EHS sleeping on that foldaway cot in Aunt Edith’s kitchen. Beyond providing me with my meals and a place to stay, Aunt Edith, who was along in years, didn’t seem particularly concerned about my welfare.  Those five months with her became for me the definition of prison’s “three hots and a cot.”  For all intents and purposes, I was on my own.

The Spartans were a valued source of stability for me during this chaotic time of my life. I was left to my own devices, and my isolation was reflected in my increased truancy and poor grades at EHS.

Interestingly, from a peer perspective, my childhood friend, Rhoda (Henderson) Thomas recently told me that I gave no indication whatsoever of my inner turmoil during this period of my life.  I was warm, affable and an overall “nice guy,” she said.  Like many teens – then and now – I internalized my demons.

St. Mark’s Community Center was a popular recreation resource for Black kids in our neighborhood. Along with several Spartans and other kids, I joined a dramatics group lead by Mr. S., a revered leader in Boston’s Black community. It was a fun co-ed group and I learned the rudiments of stagecraft — such terms as “stage-right” and “stage-left.”  Those particular terms form a small mystery, known only to theater people, and I felt accepted like an insider.

We were rehearsing a play in which I had a minor role. Soon, word got around that I’d be departing for Brooklyn once school ended for the year.

That news about my leaving caused a reaction that shocked and humiliated me.  Out of sight of everyone, Mr. S., our trusted counselor, the leader of our theatrical group, grabbed me my waist and literally lifted me off my feet. He ground his groin into me and told me how much he would miss me. I was stunned, frightened, and immobilized. And I got away from him as quickly as possible.

The assault was offstage, unseen by anyone. Today such a situation is called “He said, she said,” meaning there’s no independent corroboration of the incident.  The questions are the same then and now: Who could I tell? My friends? No. They would have teased me. Who would believe me?

By the end of 1949, Mr. S. had spearheaded the organization of a historic Boston cultural institution, had been honored by his fraternity, and was nationally recognized for his work with young Black kids — like me. Was I the only kid that Mr. S. molested? I don’t think so.

Countless times as a prosecutor later in life, I heard defense attorneys question the credibility of child abuse and sexual assault victims by asking why they didn’t promptly report allegations of sexual assault. I wanted to scream, “Let me tell you my story about the trusted Mr. S.”

Recently, a mentee, knowing my professional background, asked me the difference between rape and molestation. I told her about Mr. S. She understood.