This is the story of my struggle to overcome life’s challenges, to find positives in adversity, and to make my beloved, but flawed, nation a better place than I found it.


Making of a Social Engineer

My Truth: My Journey Toward Servant Leadership

To Dad and Alijah

I’m in the sunset of a pretty good life, and despite some mistakes, I’m in a good place.

I’m blessed with a loving wife, a wonderful daughter, granddaughter, and a great-granddaughter who’s got a bright future. I’m not worried about my next meal or a roof over my head. I’m respected in my community, liked by the people who mean the most to me, and loved by those I hold dearest.

I especially cherish my relationship with several longtime friends, dating back decades. They have inspired, comforted, strengthened, and humbled me and have contributed much to who I am today. Whenever I lose one of these friends, it’s one more of a thousand small cuts. It hurts. But in my sadness, I give a quiet prayer of thanksgiving for their generous gift of true friendship.

Much of this memoir is about those friends and my family, about my work and the hurdles I’ve faced. Much of this memoir is also about the mistakes I’ve made. I’ve tried to own and learn from them. One of them caused me to stop, think, and change the direction of my life, becoming what Thurgood Marshall’s mentor, Charles Hamilton Houston, called a social engineer, a tool for creating equality in society. Houston admonished Black attorneys, saying, “A lawyer is either a social engineer or he is a parasite on society.”  I took it to heart.

Shortly after receiving my graduate social work degree, when I was a fledgling social worker, I was tasked with helping juveniles recently released from New York State’s reform schools to re-integrate into the community. I saw first-hand the systemic racism of New York State’s juvenile “justice” system. It led me to the unsettling realization that I was a cog in a machine that perpetuated that unjust system. My job was a mistake. But I had a duty to use my education and experience to help make structural change in the treatment of our marginalized young people.

Here in this memoir, I’m attempting to address young people. I think of myself as a servant leader, who leads and empowers others by example.

In 1979, I went to law school and eventually became a prosecutor in Maryland, specializing in crimes against women and children. And I continued to learn from my mistakes.

One day, when I was unavoidably late for court, the judge, with whom I enjoyed a cordial relationship, made it very clear that he was not interested in my excuse for my tardiness. He found me in contempt of court for being late and summarily ordered me to buy doughnuts for the entire prosecutor’s office. The humor in the judge’s arbitrary judicial action spread fast throughout the courthouse, and the following day, the entire staff gleefully devoured my bounty, courtesy of the judge.

The judge’s message spread fast, too: Don’t be late for my court.

Thanks, Judge, your point was well-taken then and now, and it is remembered by me in more than just court. I learned from it and teach the message – “Never be late” — to those who have worked with and around me and the young people I mentor now. Simple punctuality shows respect for others and the importance of whatever activity you’re involved in and your commitment to get the most out of it.

I think I’ve had a positive impact on more than a few wonderful young people in the course of my 85–plus years. These days I’m living in a Southern city where we can see the grass grow almost all year round, I’m president of the Savannah 100 Foundation, using the law for social justice, and a past president of the 100 Black Men of Savannah, mentoring Savannah youth.

In no particular chronological order, I’ve led a multi-million-dollar community action program in Brooklyn, New York and an urban affairs program at Columbia University. I was active in the civil rights movement.  In 1974, as a subcommittee staff director in the U.S. House of Representatives, I drafted the landmark Juvenile Justice & Delinquency Prevention Act of that year. The legislation addressed underlying problems of juvenile justice through education, youth counseling, and alternatives to juvenile detention.

Some might say my legacy is secure, but is that what really matters?

A more relevant question might be, how did I get a legacy in the first place? Was it pure grit? Luck? God’s grace? Family and friends? Others?  Perhaps a bit of everything?

In my first position as a social worker, I heard a white colleague dismissively refer to our mostly Black charges as “the dregs of society.” I know thing one for sure: When I look around today and see the so-called “thugs” in our midst, I often say to myself, “There, but for the grace of God, go I.”  I know these “dregs” are the least of us and a marker for all of us. We are no more than the least of us. 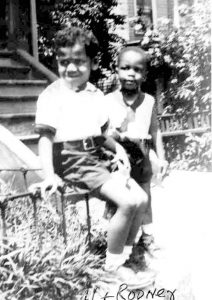 I was raised in the 1930s among the least of us in the Roxbury neighborhood of Boston, the son of Jamaican immigrants who valued education and hard work. It was a working class and cohesive neighborhood that made no distinction about race, at least when I was a kid playing dodge ball and hide-and-seek in the street.

After high school, living in Brooklyn, New York, I became an “associate” of a street gang, again what some might call the least of us. One night, just before I left for college at Howard University, the gang’s members discouraged me from joining them on a “rumble,” that is, a street fight. They told me, “You gonna be somebody.”  I listened.

In many respects, life was simpler with fewer distractions when I grew up. There was no television or internet. We played in the street after school. We got our news from the radio, newspapers, and movie newsreels. We believed our elected officials told the truth. We were guided by a social contract: Work hard, stay out of trouble, take care of business, and government will do the right thing by you.  It’s simple; that’s the contract.

There was darkness in my world of the 1930s and 1940s. Racism, anti-Semitism, and sexism were even more blatant than today. Homosexuality was a crime. Lynching was not uncommon but received little national attention. Schools and their history of segregation and less-than-equal everything were whitewashed even more than today. Beatings by teachers were common. Sometimes my grade school teacher whipped me and others when we were disobedient in class. She wielded a four-foot length of rattan, a pliable plant–like wicker used to make furniture. You were struck on the tips of your fingers. It stung like fire. You dared not pull back.

Graduation from high school was an accomplishment. Primitive meteorology made it difficult to predict the weather and get the word out, so hurricanes and other severe conditions caused natural disasters that resulted in needless loss of life. Books and movies could be and were banned for their content. Birth control was available only by a physician’s prescription to married couples. There was no such thing as television. The so–called “good old days” are a myth. Life wasn’t so great for many of us, especially Black people like me.

Walk here with a shy, insecure, bullied child of Jamaican immigrant parents, who became a striver, social engineer, and servant leader. determined to make our world a better place than he found it.

This memoir is the story of my struggle to overcome life’s challenges, to find some positives in adversity, and to help make my beloved, but deeply flawed, nation a better place than I found it.

A caveat: These essays are memoirs, not reporting. They are my memories, without a lot of background research. Whenever I’ve relied on research such as census data, I’ve said so.

Whatever sense I’ve made out of my life is based on experience, a good education, opportunity, and countless people who never hesitated to tell me not what I wanted to hear, but what I needed to hear. People like Connie, Alison, Troi, and Maurice – you’ll meet them in these essays.

Invest in our future